Border Woes: Transporting CBD into Canada is Not OK 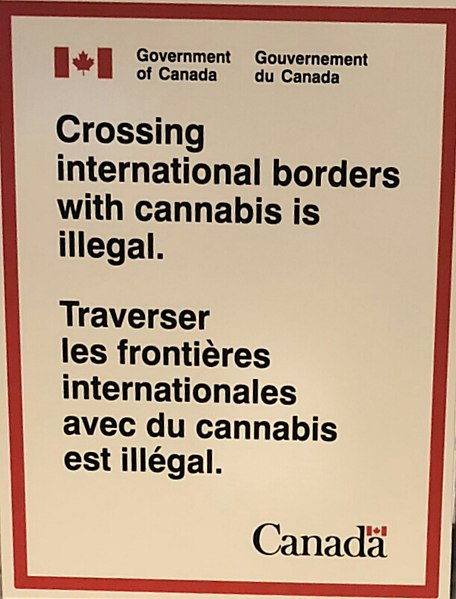 In a recent tweet, the Canada Border Services Agency (CBSA) reminded us that transporting CBD oil into Canada remains illegal. While in most places south of the 49th parallel what CBSA has to say is of little consequence, it certainly matters here in Washington State, where you’re never too far away from the Canadian border. The full text of the tweet reads:

With the coming into force of the Cannabis Act on October 17, 2019, recreational marijuana use became legal on both sides of Washington State’s 427-mile border with British Columbia, as well as other stretches of the U.S.-Canada boundary. This created a situation ripe for confusion. The man (or woman) on the Amtrak Cascades might reasonably conclude that there is nothing wrong with taking a cannabis product bought legally at a Seattle shop to Vancouver, where it can also be purchased legally.

However, as the Canadian government made clear in the information sheet it sent to every household in the country prior to the Cannabis Act’s effective date: “It’s illegal to take cannabis and cannabis products, including those with CBD, across the Canadian border, whether you’re leaving or coming to Canada. This applies to all countries, whether cannabis is legal there or not.”

With CBD products also on the hook, the potential for confusion extends to much of the borderlands. For instance, while Montana has a much stricter cannabis regime than Washington State, THC-free CBD products are not illegal in Big Sky Country. This puts not just the marijuana aficionado from Tacoma on his way to party in Van at risk of border trouble, but also the arthritic retiree from Helena heading up for a weekend in Banff.

To be fair, it’s not uncommon at all for products that are legal on both sides of a border to be subject to customs controls, for revenue and/or regulatory reasons. That said, the situation with cannabis along the U.S.-Canada border is more fraught with risk because it is still an illegal drug as far as the U.S. federal government is concerned.

It is perfectly understandably for U.S. Customs and Border Protection (CBP) to be on the lookout for cannabis products. The agency is tasked with enforcing federal law, and logically their officers in Metaline Falls, Washington should not go about their duties any differently that their colleagues 55 miles away in Eastport, Idaho. However, it is clear appears that the Feds are going far beyond that—with Canadians feeling much of the pain.

The CBC is likely not exaggerating when it reports, “Thousands of Canadians have been denied entry to the U.S. simply for admitting they’ve smoked a joint once in their lives.” As my colleague Akshat Divatia recently explained:

U.S. law will not recognize any amnesty or pardon by Canadian authorities for cannabis-related convictions. Admitting to a CBP officer that you used marijuana any time before legalization is the equivalent of a formal court conviction for that crime and you will likely be denied entry into the United States.”

The same CBC article notes than an “unsuspecting CBD oil user”—remember our arthritic retiree—could be “banned from entering the [U.S.] for life.” But you don’t even need to carry or even have used cannabis products to get in trouble. As Akshat notes:

Those who legally work in the Canadian cannabis industry must provide details about their role and convince U.S. border officers that their trip to the U.S. is purely personal. Cannabis workers will likely need to prove that while in the U.S., they will not engage in any networking or strategic meetings, presentations, marketing efforts, or any manufacturing or distribution activities with customers or cannabis industry colleagues.”

Stated less elegantly, coming to the U.S. for cannabis-related business is a no-no. Even investing in cannabis businesses could theoretically get you banned for life from the United States. With this kind of onslaught, even innocuous activities such as changing planes at a U.S. airport to attend a cannabis conference in a third country are causes of concern.

It doesn’t stop there, though. In at least one instance that we know of, CBP took away NEXUS privileges from someone who wrote a reference letter for a fellow Canadian applying for a waiver for a marijuana-related ineligibility. This is worth repeating. They did not take away NEXUS privileges from someone who him or herself had a marijuana ineligibility, but rather from someone who wanted to help that person by writing a letter. This would be akin to a lawyer getting sanctioned for serving as a character reference for a bar applicant who had a run-in with the law in the past.

You might think, well, it’s just NEXUS—wait in the regular line like the rest of us. But the ability to avoid long waits at the border can be critical for persons engaged in cross-border business activities. And, again, the privileges are being taken away for writing a letter.

I wish I could say that the bottom line is as simple as not taking any cannabis products—whether THC, CBD or somewhere in between—with you when you cross the border. However, the risks run much deeper for Canadians and other foreigners with any cannabis involvement heading south. And to be sure, this includes foreigners living in the United States, who are pretty much subject to the same ineligibilities.

If in doubt, talk to a lawyer before you go anywhere near the Peace Arch. DON’T take chances: The consequences can be as serious as they get.