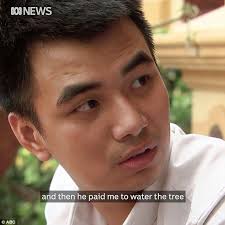 The discovery last week of 39 people who died being smuggled into the UK in the back of a  articulated freezer lorry from Zeebrugge has begun to unravel and it is becoming clear that some of the victims were from Vietnam and most likely being smuggled in to house sit (slavery) illegal cannabis grows in the UK.

This is by no means a UK only problem and over the last year we’ve seen a multitude of stories from California to Australia, to the UK and beyond where Vietnamese and Chinese crime gangs have purchased or rented properties to grow illegal cannabis and then placed house sitters who are either very young in the teens or of retired age.

Three children have been discovered tending to a cannabis farm after being trafficked into the UK from Vietnam, police have said.

The three, aged 15 to 17, were rescued on 14 October from a property on Livsey Street, Rochdale.

Greater Manchester Police said they were found living in “squalid conditions” and had been made to work at the farm for months.

The groups running the illegals grows, according to the Sheriff, include Hispanic gangs, Asian Gangs, Cartels from Mexico, China and Russia. Last week two individuals from China were arrested at one of the saturation operations conducted by the Riverside County Sheriff Department.

Bianco said the county is still investigating who all the players are from whom they have already arrested.

“We also have sex trafficking, which is part of human trafficking, being linked to these operations, including torture,” said Bianco, who added that kidnapping, torture, murder and gun battles are common in a community with illegal grows.

Operation Silverdrift was established in July last year in an effort to target organised crime gangs who set up cannabis grow houses in rental properties.

Police say the syndicates behind the grow houses have both interstate and international connections.

Based in China, the snakeheads are black-market “travel agents” for illegal migrants who enter the sex trade, work in drug cultivation or end up in forced labour in the UK. They charge from £6,000 to £26,000 for the crossing, one expert said.

We only need to look back a few weeks to see this recent BBC report about the conviction of Vietnamese gangs found to be cultivatiion cannabis in grow house in South Wales (UK). Most important to take into account is the industrial scale of the issue.

The ringleaders of a Vietnamese crime gang have been jailed after police seized 2.5 tonnes of cannabis worth about £6m in raids across south Wales.

A total of 21 people have been sentenced in a case going back to 2017 after dozens of cannabis factories were uncovered across the region and beyond.

One of the defendants initially claimed to be 14 years old, but police proved he was actually aged 26.

The gang leaders were sentenced at Merthyr Tydfil Crown Court on Friday.

Bang Xuan Luong, 44, was sentenced to eight years in prison. His partner, 42-year-old Vu Thi Thu Thuy, was jailed for six years and Tuan Anh Pham, 20, who was described in court as the “IT Man”, received five years.

An investigation into a cannabis factory in the Cynon Valley led officers from South Wales Police’s Force Intelligence and Organised Crime Unit (FIOCU) to a string of others across south Wales, Gwent and Dyfed-Powys force areas.

The gang, all from Vietnam, were arrested as part of Operation Violet Panama, which saw the three police forces and the National Crime Agency raid 19 addresses in November 2017.

In addition to 15 cannabis factories, the investigation led to the detection of more than 30 further factories and storage facilities across Wales and as far afield as Coventry, all linked to the gang.

During hearings at Merthyr Tydfil Crown Court, 19 of 23 defendants plead guilty to conspiracy to produce a Class B drug, two people were found guilty by a jury and two others were acquitted.

Two men acting as crop-sitters after being leant on by loan sharks or debt collectors, are the latest to be jailed in Newcastle over drug crops linked to Asian underworld figures.

The Newcastle District Court heard that in 2016 several homes across the New South Wales Hunter Valley were set up as grow houses.

One syndicate operated like an army, with the Vietnamese crop-sitters referred to as ‘soldiers’.

In recent weeks two men were jailed and on Friday another man, Quang Le was sentenced to a maximum three years and four months jail in relation to 264 hydroponic plants.

The court heard he had racked up $30,000 worth of gambling debts and was pressured by loan sharks to ‘babysit’ cannabis crops.

We could easily reel off another 30 such incidences in 2019 without batting an eyelid, which does, we hope, give you an idea of the scale of the issue.

It’s also concerning to think that in countries with efficient and fairly non corrupt policing and legal systems like the US, Australia & UK how large slavery and illegal cannabis problem is.

What might be happening in Albania, the Ukraine etc doesn’t bear thinking about ?

Will this latest tragedy in the UK force politicians and law enforcement to double down on moving the market away from crime and towards regulation whilst at the same time increase enforcement to concentrate on prosecuting cannabis crime gangs rather than small time medical cannabis growers and, usually inept, home growers.

If not we’re likely to see another story of smuggling deaths very soon.